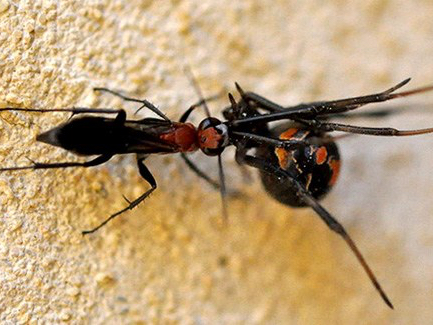 The redback spider has long been known as one of Australia’s 10 most deadly creatures, but recent research has found that it faces its own dangers.

The agenioideus nigricornis, which belongs to the family of spider wasps, can sting a redback, drag it back to the nest, and lay an egg: once this egg hatches, the larval wasp feeds on the paralysed spider. It’s a fair contest, as the wasp is the same size as the redback spider, which uses a neurotoxic venom and can prey on insects and creatures much larger than itself.

Professor Andy Austin, of the University of Adelaide’s Australian Centre for Evolutionary Biology and Biodiversity, said “We’re very excited by this discovery, which has prompted us to study this species of wasp more closely. It’s the first record of a wasp preying on redback spiders (Latrodectus hasselti) and it contributes greatly to our understanding of how these wasps behave in Australia.”

Professor Austin and Dr Lars Krogmann, now at the Stuttgart State Museum of Natural History, have just published this paper on the redback spider-hunting wasp in the Australian Journal of Entomology.

[Featured image: A redback spider-hunting wasp dragging its paralysed prey back to its nest Photo by Florian and Peter Irwin]