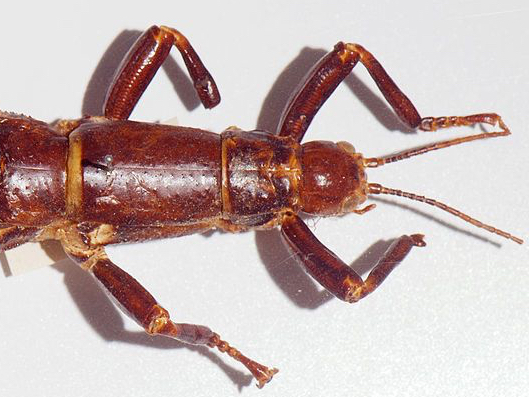 Welcome back to Biodiversity Revolution for 2013. Today I’ve got another insectile treat: indeed, a tree insectile treat. It’s called the Lord Howe Island stick insect, and while that doesn’t sound too exciting, there are some unusual features to this little critter.

Firstly, it’s not so little: they can grow to 15 cm (5.9 inches), even larger than the New Zealand Giant Weta, which possibly accounts for the nickname ‘tree lobster’.

Secondly, they appear to be older than the island they live on. Associate Professor Thomas Buckley, of Landcare Research and the University of Auckland, used DNA evidence to show that this insect appears to be 22 million years old, while Lord Howe island is only about 7 million.

So the Lord Howe Island tree lobster is neither a lobster nor a native of Lord Howe Island. Nor is it necessarily a tree-dweller, as they have adapted to ground-dwelling life. It may have been this adaptation that led to their near-extinction in 1918, when a shipwreck on the island brought black rats that wiped out the island population.

They were believed to be extinct, until 2001, when David Pridell and Nick Carlisle climbed the aptly named Ball’s Pyramid (a tiny island of almost bare rock that looks like the spire of a cathedral), at night, to find 24 of these insects in one single bush. This page has some images that will give you the idea.

They brought back two breeding pairs, and gave one to Patrick Honan, then at the Melbourne Zoo. And here we find another insectile anomaly: these stick insects, unlike most other insects, seem to pair off. That’s strange enough, but, according to Patrick Honan, they sleep in pairs, with the male draping three of his legs protectively over the female.

Thanks to Patrick’s skill and dedication, the zoo now has over 700 adults over 10,000 eggs, and is hoping to be able to release them into the wild. This will have to wait, however, until the rat population is exterminated and the human population comes to accept the idea of giant stick insects creeping around at night.

This is a definite win for biodiversity management, in bringing a species back from the brink of extinction. It’s also a warning about the dangers of introduced species: while the sailors didn’t intend the shipwreck or the escape of the rats, the introduction of the pest species nearly caused the extinction of one species, and could easily have caused others. For an idea of how hard life is for a stick insect, the end of this article has a great video of a hatching.