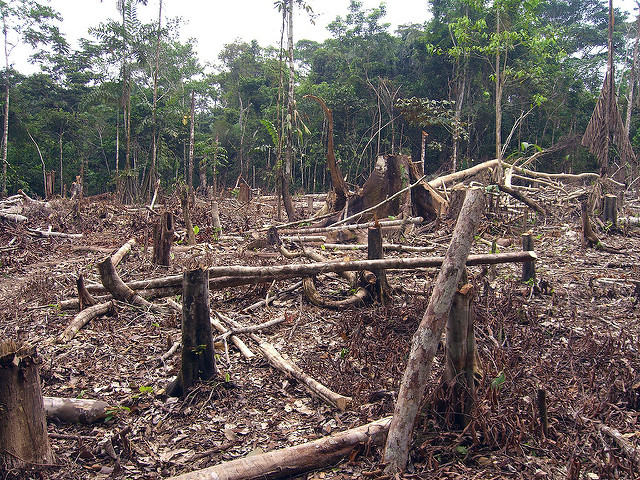 By Andrew Lowe, Stefan Caddy-Retalic, Eleanor Dormontt. Published in the University of Adelaide’s e-Science online magazine as “Growing Solo: Deforestation and Genetic Diversity“. e-Science is available for iPad or Android, or viewable on the web here.

The human destruction of tropical forests has dramatically increased in recent decades, and the threat to tropical ecosystems is now a pressing issue. The most important impact of deforestation to biodiversity is the loss of habitat, but the loss of these ecosystems also leaves a lasting legacy with which plants and animals remaining in these fragmented systems must cope in the future. The degradation of forests results from two main processes: the division of forests into patches due to clearance for agriculture, and the degradation of habitat following removal processes, such as selective logging.

Tropical trees are thought to be particularly vulnerable to the effects of habitat degradation, because of their ecological characters. These characteristics include low population density (i.e. individual trees may be kilometers apart), complex mating systems (often meaning that trees need big, genetically diverse populations to reproduce), and the intimate relations between trees and their pollinators and seed vectors (which are easily disrupted due to loss of habitat). These changes may also impact upon population health. In the short term, disturbed tree populations often suffer increased disease and pest vulnerability. In the long term, the loss of variation is likely to reduce the ability of forest trees to respond to future environmental changes, such as a shifting climate or new diseases.

The impact of fragmentation or disturbance on genetic diversity (the number of different genes within a population) has been explored in several scientific studies over the last thirty years. From these studies we know that tree populations in small patches of forest undergo a range of genetic changes, which include; a loss of genetic diversity (due to smaller population size), increased differences between populations (due to a reduced interbreeding between trees in isolated patches), and increased inbreeding (i.e. matings between closely related individuals due to a lack of choice of mates).

Interestingly, research shows that many trees in fragmented or degraded forests have dealt surprisingly well with their new circumstances, and show surprisingly little reduction in genetic diversity or increase in genetic differences between isolated populations. This is because trees have a long life span, and an ability to disperse pollen and seeds over long distances using insects, birds and mammals.

For many species an extensive network of gene flow (up to 10 km) exists across landscapes (including those that are fragmented and degraded) that helps slow the loss of genetic diversity and thereby assist the longer -term survival of populations. In this context, forest fragments and isolated trees may be important stepping-stones for gene flow between forest fragments, connecting and enhancing population variability. This view is far from the idea that remnant isolated trees are only the ‘living dead’, persisting due to their long life span but contributing little to forest revival or the evolution of future species.

However, when the seeds of trees in these degraded landscapes are examined another story emerges. Sapling raised from these seeds show signs of decreased vigor due to the lack of genetic diversity and matings between closely related individuals (inbreeding depression). A number of studies have shown that seed collected from isolated trees growing on farming lands tend to show reduced strength. However, changes in one measure may also be buffered by changes at another. For example, although the percentage of flowers setting seed may be reduced, the overall level of seed production per tree may be increased, due to a higher flower production from increased crown size, or greater stimulation of flowering through increased canopy exposure.

Thus there is a trade off between positive and negative effects on genetic diversity. Some factors like gene flow are able to maintain or increase diversity, whilst others, like inbreeding cause decreased diversity and problems with long-term population health. Unfortunately these observations reinforce theoretical and simulation studies that for small isolated tree populations, genetic diversity is likely to be lost slowly over time. Although in the case of trees, this may take decades or even centuries.

The risk posed to genetic diversity from deforestation was initially highlighted decades ago. So what can we do about it? The best way to prevent the loss of genetic diversity in populations is to increase population size. This tactic also helps remediate problems associated with inbreeding. Remnant populations can be increased in size or habitat corridors can be established to link remnants. Interestingly, in Costa Rica, there has been a large-scale exodus from rural landscapes to urban living. With the abandonment of farms, rainforest has recolonized significant portions of the landscape. This is potentially good news for rainforest trees, their genetic diversity, and the wildlife that depends on this habitat.

Many seed bank collections have also been made from natural populations of tropical trees, particularly in Latin America to maintain sources of genetic diversity for future potential, particularly for important timber species like mahogany and Spanish cedar. However, can these collections continue to be sourced from the current degraded landscape given findings of reduced reproductive output and the potentially poor health of offspring? Some studies indicate that this may be possible and not as hard as previously thought. For example, small, fragmented populations of Pinus tecunumanii (e.g. San Jeronimo in Guatemala which has reduced from 200 ha in 1980 to some 30 ha currently) still contain significant levels of genetic diversity. In addition, seed material of Gliricidia sepium sourced from a small fragmented population in Guatemala (Retalhuleu) maintains high vigour, and has provided a suitable basis for breeding programs and seed orchards. Therefore, there may yet be hope for new germplasm conservation programs that can only source material from degraded populations.

[Featured image: Slash and burn agriculture in the Amazon Image by Threat to Democracy/Flickr. Licensed under Creative Commons license License.]

Vranckx GUY, Jacquemyn H, Muys B, Honnay O (2011) Meta-analysis of susceptibility of woody plants to loss of genetic diversity through habitat fragmentation. Conservation Biology 26, 228-237.
This one quantifies the lack of drift effect in tree populations. It reports only changes in allele diversity/frequency metrics (allelic diversity and expected heterozygosity) in tree populations that have been fragmented for more than 1 generation. It also shows that tree progeny are particularly susceptible to changes in observed heterozygosity with fragmentation, supporting our case that mating patterns are more important than drift in tree populations.
http://onlinelibrary.wiley.com/doi/10.1111/j.1523-1739.2011.01778.x/abstract