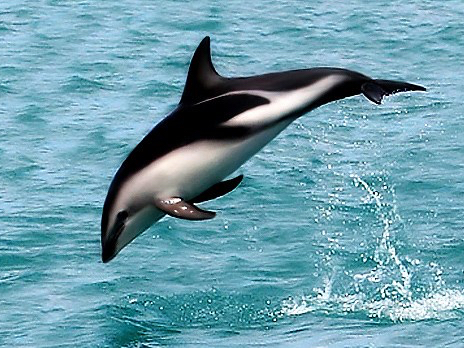 Douglas Adams, in The Hitch-hikers Guide to the Galaxy, wrote that “Man had always assumed that he was more intelligent than dolphins because he had achieved so much… the wheel, New York, wars, and so on, whilst all the dolphins had ever done was muck about in the water having a good time. Conversely, the dolphins believed themselves to be more intelligent than man for precisely the same reasons.”

You have to admit that he has a point. There’s evidence that dolphins have  other traits that indicate high intelligence, too: a brain size that’s 4 to 5 times larger than the normal brain-to-body size ratio for animals of their size, and a much larger neocortex (the part of the brain that processes emotional information and is responsible for higher-order thinking). They also demonstrate evidence of higher-order thinking, such as cultural learning and an understanding of abstract concepts. The fact that  dolphin ancestors came out of the water, decided it wasn’t such a great idea, and went back millions of years ago, might be evidence of this higher-order thinking too (yes, this is (a) overly simplistic, and (b) quite facaetious).

And Joe Hanson, at It’s Okay To Be Smart, has another point: dolphins have names. It turns out young dolphins name themselves, and dolphins will call each other by name. But the name is not just an identifier, like Archibald or Gertrude: dolphin names contain other information about that specific creature.

Don’t get the idea that humans and dolphins have the name-recognition space all to themselves, though – there are other creatures that have distinctive calls to recognise mates or family members. Pairs of Australian magpies, for example, will have an individual two-part call by which they identify each other at a distance – one bird calls the first part and the other responds, following so closely that it sounds like one bird. I have 3 pairs around my back garden at the moment, each with a distinctive pair call. Mind you, they have to compete with the racket of the rainbow lorikeets which descend in huge clouds to feed on the red flowering gums: for those who haven’t heard them, a pack of feeding lorikeets sounds like a large cafe at lunchtime, all shrieking and squawking, except that cafe diners rarely hang upside down to feed.

And to round out this “interesting facts about animal behaviour” post, I’ll leave you with this article from Cracked: from finches responding angrily to bad grammar to capuchin monkeys and chimps learning a fairly sophisticated view of money, there’s plenty to show that we still know so little about the living creatures we share the world with.