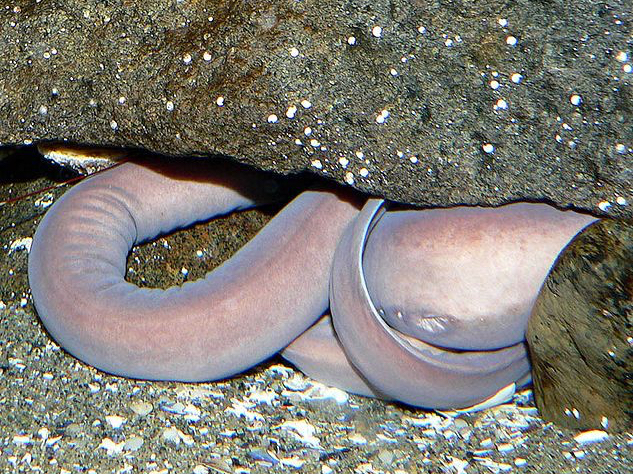 The lift this morning looked like the scene of a death match between Mud Man and The Incredible Slime Monster, so what better time to introduce another warp in life’s rich tapestry: the hagfish.

These denizens of the deep, the not-so-deep, and in fact every ocean on earth, have one pre-eminent trait, which is an astonishing ability to produce slime in large quantities – in just a few minutes they can turn any watery environment
into about 20 litres of gelatinous and sticky goo. This is primarily a defensive trick, as the slime clogs the gills of predators: this goo, combined with the ability of the hagfish to tie itself into a knot which travels along the body of the animal, can free the hagfish from predators very successfully.

The hagfish also needs to use this travelling knot behaviour periodically to free its own gills from the slime it produces. You might think that a creature that has to tie itself in knots to prevent it dying of its own defence mechanism might be just one short step from extinction, but you’d be wrong: the hagfish has remained unchanged for over 300 million years.

So they’ve seen dinosaurs come and go, or would if they’d been on the surface, while homo sapiens have been around for a mere 250,000 years – a mere blink of an eye, if the hagfish had eyes rather than primitive eyespots. So they must be doing something right.

They’re also the only known living animals to have a skull but not a vertebral column, and can enter dead and dying sea creatures (or indeed fish trapped in a fishing net) to feed, using both their tooth-like structures to grab food to swallow, and absorbing dissolved food directly across their skin and gills: in effect, the hagfish are feeding both the inside and the outside at once, which is handy behaviour for a scavenger, as it maximises their ability to ingest as much food as possible from a food source. They can use their travelling-knot trick to give them extra heft when pulling off chunks of meat, gaining them access to the inside of larger carrion, and then eat their way out.

Leaving aside the slime and the rope trick, these creatures represent an evolutionary snapshot between invertebrates and fish: the fact that they’ve survived for so long virtually unchanged seems to indicate that the two added features have made all the difference between survival and extinction.