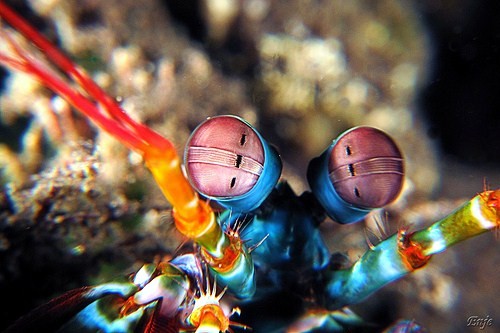 I’ll be off work for a week or so, and while I’m gone I’d like to leave you with some of my favourite posts on biodiversity.

Cephalopod magic: the amazing abilities of cephalopods to camouflage and hypnotise.

Beetling away for Biodiversity Month: pictures of the bright, the beautiful, and the big (and scary) in the world of beetles. But don’t leave any pencils lying around!

Shark-o-rama: hands up anyone who guessed that the tasseled wobbegong and the scalloped bonnethead are both species of shark? Among others, both benign and scary.

Let’s do the squid: more wonders from the world of squid, including the big, the bad, and the beautiful.

Here be dragons: a new species found in Indonesia – tiny flying lizards that are basically dragons (no word yet on fire-breathing abilities).

Australia – land of the hot pink slug: not much more needs be said here, I think.

Fun with slugs: the astonishing beauty and variety of sea slugs.

Colourful, cheeky, and invisible – the rainbow lorikeet: these birds are gorgeous, cheerful, and ubiquitous.

Henry Ford’s biggest mistake: a cautionary tale about why biodiversity is vital, and what happens when we neglect it.

Hagfish II – the sliming (plus some mantis shrimp goodness): the hagfish and the peacock mantis shrimp are two of the most amazing creatures in the ocean.

Zombie bees and killer shrimp: the peacock mantis shrimp making its first appearance, and the rapidity with which (native)parasitic flies evolved to make use of (imported) honeybees.

A dolphin by any other name: dolphins have impressive brains and social structures, as well as names which contain other information beside identity. (Then I segue into the conversation of birds, for some reason).

Why do we need biodiversity? A discussion on some of the reasons it’s worth preserving as much biodiversity as possible.

Karma chameleon: a ramble through several evolutionary adaptations, including colours in chameleons and poison in frogs.

Sharks – who needs them? The short answer is, ‘we all do’, at least if we want our fisheries to stay healthy and ocean plankton to keep producing oxygen.

The importance of ants in plant diversification: why we need the humble ant.