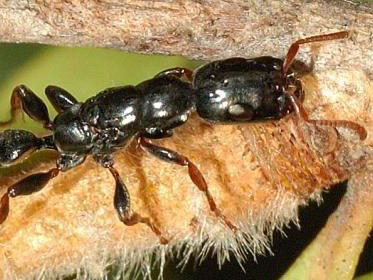 Imagine you are hacking your way through the Amazon rainforest and you venture across a grove completely devoid of ground vegetation and dominated by a single tree species. A highly unusual occurrence in one of the most diverse ecosystems on earth. Congratulations you have found a Devil’s garden.

For years it was uncertain what caused Devil’s Gardens, also known locally as a chacra, but we now know they are due to a highly specialised ant species which prefers to live in and on a host plant, and poisons all other plants in an area, promoting only its favoured host. Certainly a demon gardener, the ant is Myrmelachista schumanni and its host plant is Duroia hirsuta, and it is a very rare mutualism – a situation where both plant and ant benefit. 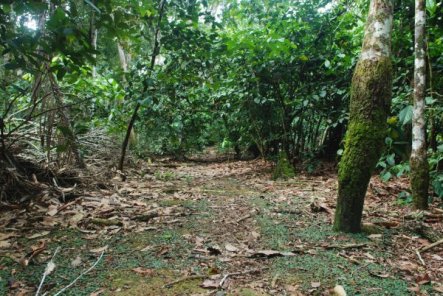 This strategy is very successful and some of the oldest gardens have been estimated to be over 800 years old. Researchers working in Peru demonstrated that it was ants causing the effect by planting different trees in naturally occurring gardens. Only those plants which were prevented from being attacked by ants survived. The ants kill their unwanted floral trespassers by injecting their leaves with formic acid. This work overturned a previous hypothesis that it was the host tree that was killing off the other plants by releasing a toxic chemical from its roots or dropped leaves, a phenomena known as allopathy.

Devil’s gardens have been known for a long time from the Brazilian Amazon (in fact I was lucky enough to see one close Manaus in the central Amazon), but new work has found evidence for this mutualism 2000 km from any other known instances in French Guiana. The host plant, Duroia hirsuta, can be found across the intervening forest (from plant distribution databases, GBIF), and so is no restriction to the distribution of the Gardens. Their current disjunct distribution seems more likely due to the increased rarity, potentially due to changed environmental factors, of a once more widespread practise.