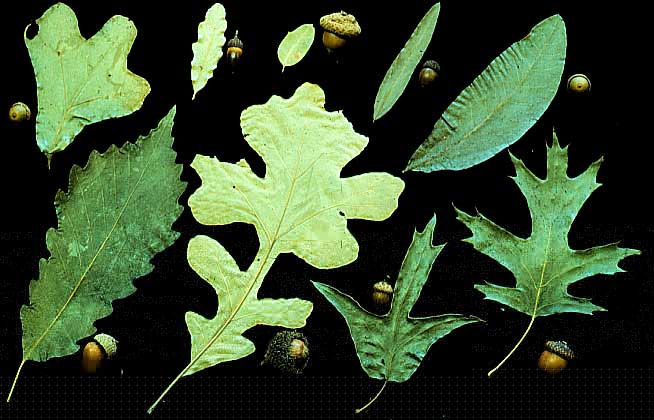 Plants have different shaped leaves to cope with different environmental conditions. But  many plants change the shape of their leaves over time and space! Why?

Have you ever wondered why the shape of leaves are so different among plants? Some can be simple ellipses, some long and thin, some short and broad, and some with deep dissections or lobes.

The shape of leaves is largely a consequence of the anatomical and physiological adaptations that plants employ to cope with their environments, and is part of the natural inventory of plant biodiversity. Long leaves help with temperature regulation and are good for hot conditions, thin leaves help prevent water loss and are good for dry conditions, and large, broad leaves which can harvest lots of light are good for life in gloomy conditions, such as the rainforest understory.

Since the shape of a plants’ leaves is linked with environment, measuring leaf shape variation can also allow us to predict the success of a species under future climates and their suitability for planting and revegetation in different environmental conditions.

A good example of important leaf shape variation has been observed in the narrow leaved hop bush, Dodonaea viscosa. As noted in a previous blog, leaves of the hop bush have got narrower over time in response to a warmer, dryer climate.

Scientists interested in how plants grow use two measures to assess the adaptive potential, likely survival and competitive ability of an individual from its leaves; leaf area – which appears to be related to the efficiency of growth,  and the ratio of the area of a leaf to its weight (termed specific leaf area) – which is related to the efficiency of its use of resources.

In a recent study, both characters were measured on narrow leaf hop bushes across more than 100 populations sampled along a 1,000 km linear transect from the Northern Territory to South Australia. Along this transect, leaf area increased by more than 10 times and the specific leaf area of plants more than doubled. These changes were correlated with increasing rainfall, decreasing temperature and changes in soils. This level of variation is considerable and in part explains why the hop bush is able to grow across such a very broad range of environmental variation.

So what next for this work? Of interest is understanding if this leaf shape variation is under genetic control, or if it just represents a flexible (plastic) adaptation to environmental change. To distinguish between these two options, hop bush plants from different populations are being grown under uniform conditions. If, at the end of the experiment, individuals from different populations do not show leaf shape variation, then the leaf variation we observe in natural populations is due to a short term, plastic response. If, on the other hand, differences in leaf shape are maintained even under identical growing conditions, then the difference have a genetic base. It may also be possible for their to be a combination of genetic and plastic responses, where the level of plastic response is genetically determined.

Since the hop bush is widely used for revegetation in Australia, sourcing the right seed is especially important. This plant obviously responds to different environments, so matching leaf shape to the appropriate environment will be important. However as the climate is changing (getting warmer and drying across much of the range of the species), it is recommended that seed of the hop-bush be collected from areas that are warmer and drier to allow for future adaptation to climate change. These recommendations fit with recent restoration advice, but understanding whether leaf shape is under  genetic or plastic control will help us to further refine conservation and restoration strategies for this species.